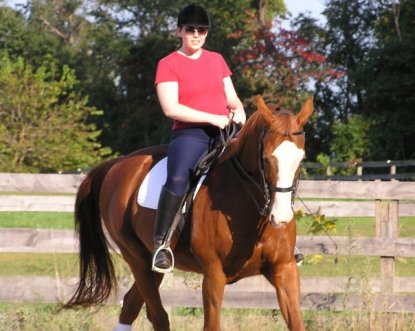 I have been riding horses for 30 years. For more than 20 years I trained with Jean-Claude Racinet, a well known author and classical french dressage master trained at the Cadre Noir in France. JCR was known for his vigorous defense of Francois Baucher in both his teachings and writings. He authored numerous books and helped to ground me in the keen understanding that the musculoskeletal system of the horse is key to how they can properly perform. Over his life this morphed into a deep study of osteopathic manipulations on the horse that could release vertebral blockages causing pain, ultimately coming back to the true principle in Riding in Lightness: the flexion of the jaw.

I have worked with trainers from other schools of thought from Centered Riding to the traditional German method. However, Jean-Claude remains the greatest influence on my life and my approach to horsemanship:

Hand without leg, leg without hand.

The release of the aids.

I have owned dogs since I was a year old. Beginning in the mid 2000s I formerly got involved with animal rescue as a foster home for our local SPCA. We also grew our own pack of Akitas, which then expanded into German Shepherds. My family volunteered locally at other animal rescues walking and feeding dogs, modifying behavior or fostering dogs in need.

For a short time, I assumed duties of a small animal welfare nonprofit that provided medical grants to animal rescues. I brought that organization back to financial health and turned the board around into a fully functioning organization releasing its first year of grants.

I am also a certified Equine and Canine Massage therapist.

I am also currently working on an Aromatherapy certification and I am certified in AromaTouch(c) Technique from DoTerra.